Wagashi/和菓子, or “Japanese Cakes” are a boon for people who don’t eat eggs or dairy products.
No wonder they are witnessing a boom all over the world!
And true tradtional wagashi are not only healthy and tasty but also so artistic! 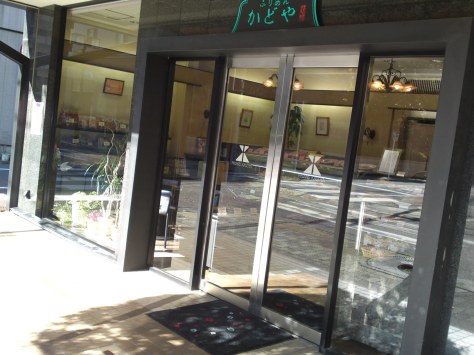 now, in Shizuoka City there a splendid and very traditional cake shop called Friand Kadoya which makes both European-style and wagashi cakes!
It is a famous establishment place and their wagashi can be enjoyed at Issa Kissa in Shizuoka JR Station!
Actually the shop stand less than 10 minutes on foot from the Shizuoka JR Station South Exit! 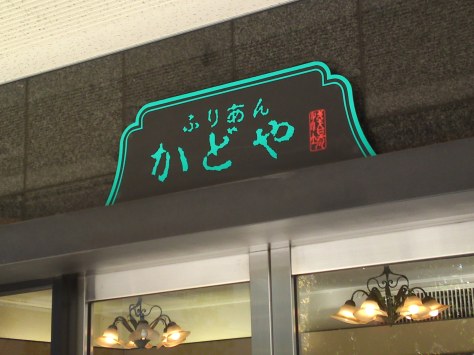 “Friand/ふりあん” can be loosely translated as “gourmet’s pleasure”, although the French will useful it in the expression, “Je suis friand de…/I love…”. The word “friandise/sweets” is the noun for the adjective “friand”!

Mr. Eiji Asaba/浅場栄一さん is the 3rd geneartion owner/chef at Friand Kadoya.
After graduating from High School he spent 2 years learning his craft in a wagashi cake school in Tokyo for 2 years and worked for 2 and a half more years in Tokyo before working under his father’s supervision for 13 years. he has been the owner and chef for the last 7 years following the father’s departure from this world.

The wagashi cakes are separately displayed.
They are exclusively made with komeko/rice flour grown and produced in Japan. Sometimes he does have to use a little wheat flour.
All coloring used in his cakes are either of natural vegetable and fruit origins or coloring only registered and allowed by the Japanese Government.

March being a very busy season I had to content myself with a short chat with Mr. Asaba, a very affable man, and taking enough photographs to give you an indication of the true delicacies and works of art in wait for you! 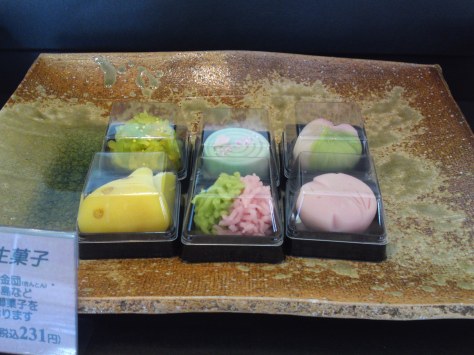 All wagashi can be bought separately, in pairs or in packages of varying volume! 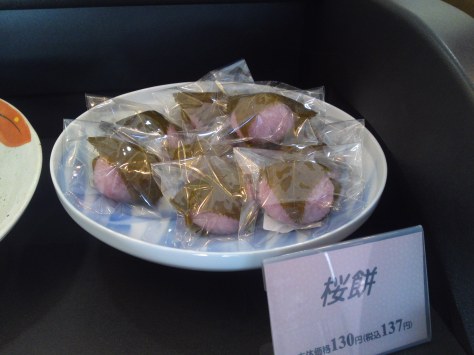 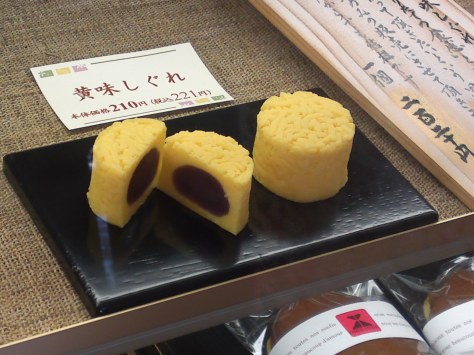 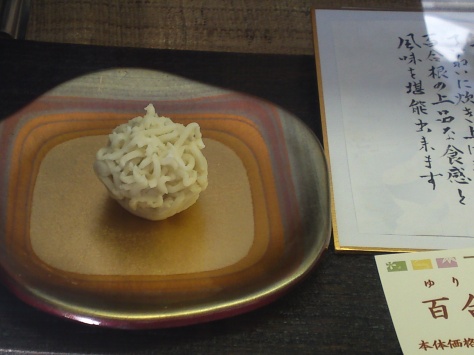 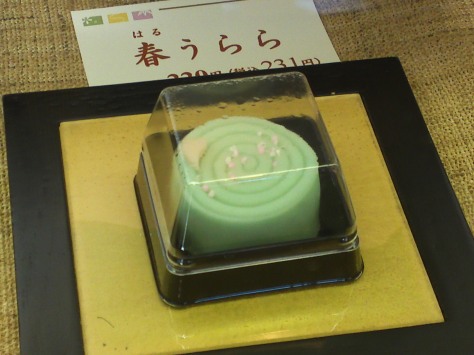 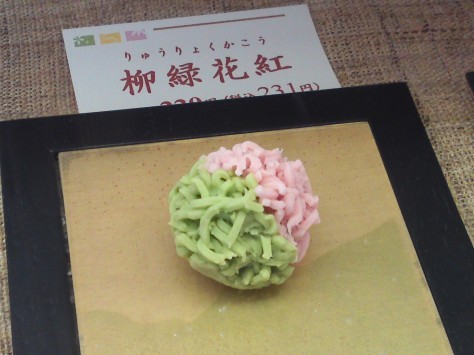 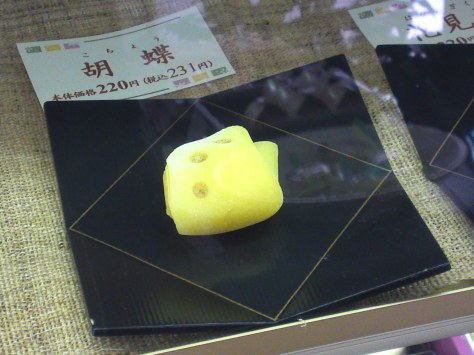 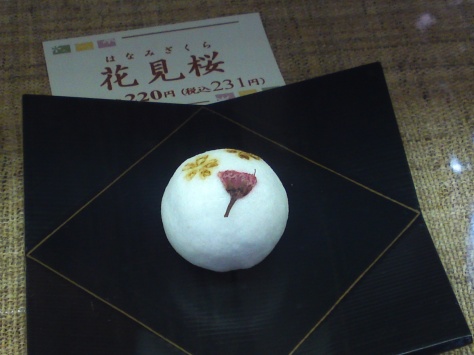 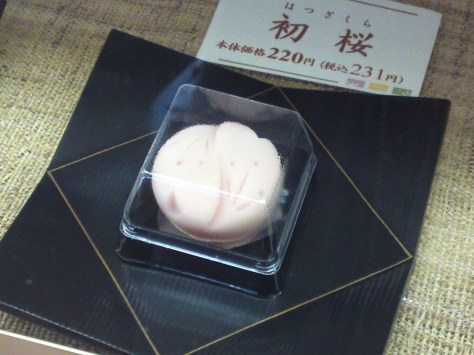 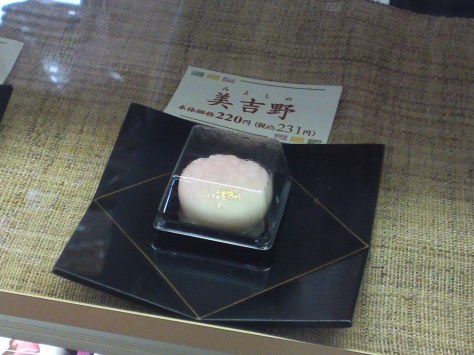 Na no Hana!
I’ve already had the pleasure to taste that one!

First of all expect all these cakes to be tasted and introduced in future postings! As they are seasonal, this promises to be ong series!

And as soon as Mr. Asaba is not so busy I will interview him at work! 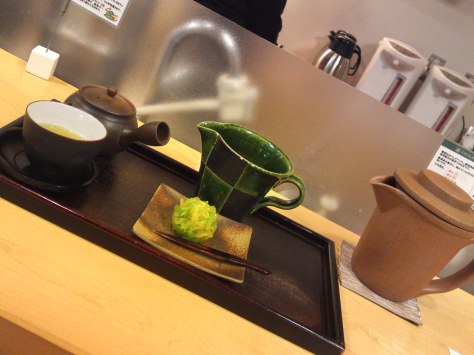 4 years ago, in June exactly, Shizuoka JR Station was completely renovated and the basement linking the city to the north exit saw the birth of some very interesting shops!
If you arrive directly at Shizuoka JR Station take thes tairs down and you will find Kissa Issa Tea cafe on your left. You will find it on your right if you reach the station from the basement pasageway!

You are graciously invited to taste Shizuoka City Green Tea!
This cute little cafe was the idea behind a collaboration project between the Shizuoka City Tea Growers Association and the Municipal Government of Shizuoka City! 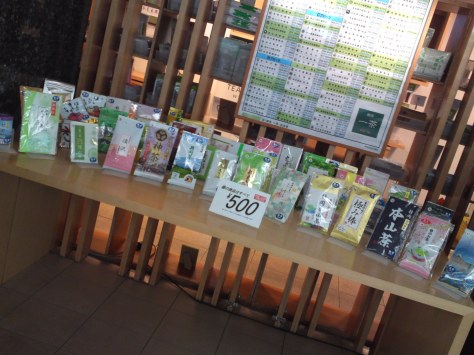 The whole list of Green Tea Growers and Companies in Shizuoka City!

You can also buy take-out hot green tea (but consume it on site. This is not Starbucks!)! 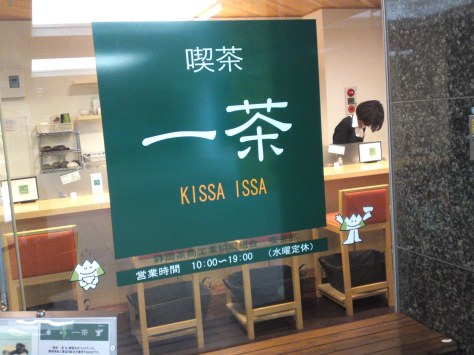 Green is the color of tea!
Closed on Wednesdays only, but always open on week-ends and national Holidays for the pleasure of the many visitors!

Smokers, keep out if you please!

More green teas on sale inside! 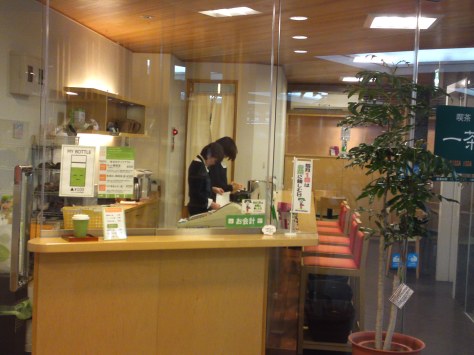 Written in Japanese, but the staff will try their best to explain it!

The three teas proposed on the menu every week are also displayed for purchase near the cash register!

There were two different Japanese wagashi cakes available made by Friand Kadoya in Inagawa Cho, Suruga Ku, Shizuoka City, south of the JR Station!
The one I chose is a kinton and sweetmeat/anko cake named Na no Hana/rapeseed flower!

And the tea I chose was a Tamachi No Aji Ichiban (made with first tea crop leaves)!

my set!
The staff prpepare the first cup of tea and serve a pot of water for the next cups!

The first cup of green tea!

The wagshi cake, a little jewel! 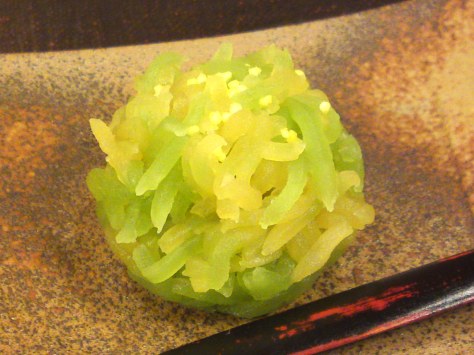 It is supposed to represent the shape of rape seed flowers!

Filled with sweetmeat!
And it’s vegan!
made by Arian Kadoya (see below for details!)!

The (small) Rama Group which has been serving for some time vegan food inside the home of some of their members in the south of Shizuoka City at last on August 6th opened a real Cafe & Shop in Gennan Street, Gofuku-Cho, Aoi Ku, in the middle of the city for the pleasure of all vegans and health food lovers!

I’m no vegan myself, but I do appreciate it from time to time, and I’m really happy for my friends and visitors to Shizuoka City who have such priorities! 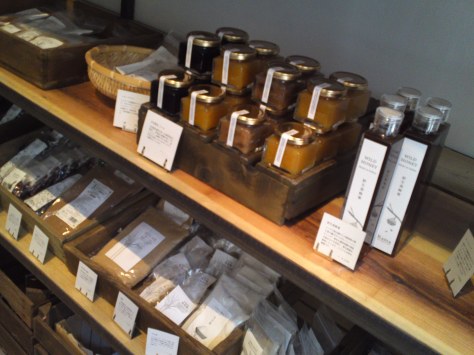 The shop itself offers an enormous (by Japanese standards!) array of vegan, organic and macrobiotic foods including home-made jams…. 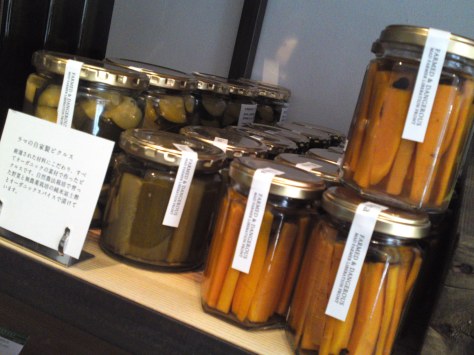 and pickles made with fruit and vegetables locally and organically grown.

It is all set in a beautiful and very natural environment, the more for it as it is open as a Cafe all day long! 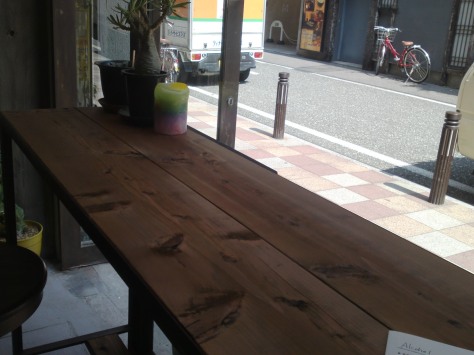 The general design makes use of a lot of wood.
You can either sit a t tables, or in my case at the counter overlooking the street outside! 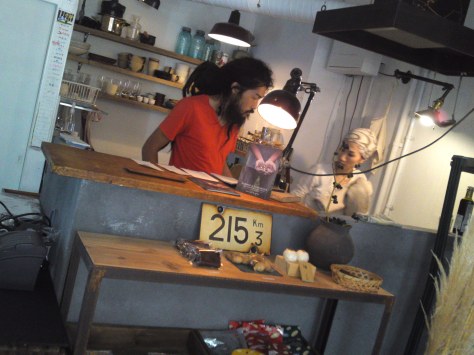 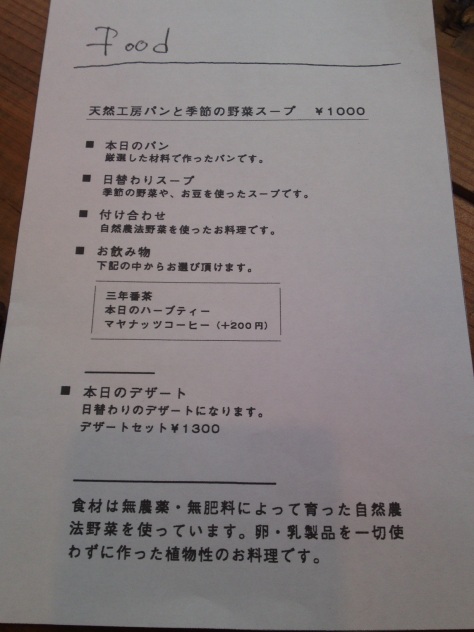 As for the food served the lunch is unique but changes regularly depending on the seasonal ingredients.
They serve all kinds of drinks, including organic beer!
If you don’t speak Japanese speak slowly in English and I’m sure mutual understanding will be easy! 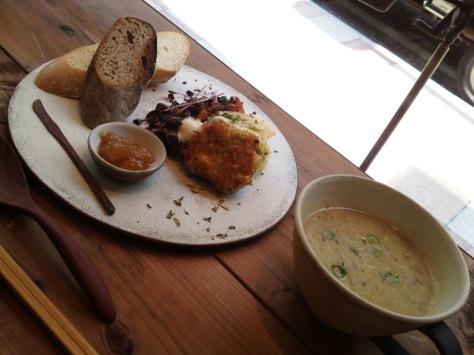 The lunch of the day!
Very appetizing, indeed!
As far as I know this is the sole truly vegan restaurant in town, and probably in the whole prefecture

The hot soup!
No dairy products is used whatsoever!

It is not only healthy but has a beautiful cachet attached to it!

Whatever the angle it is definitely tempting! 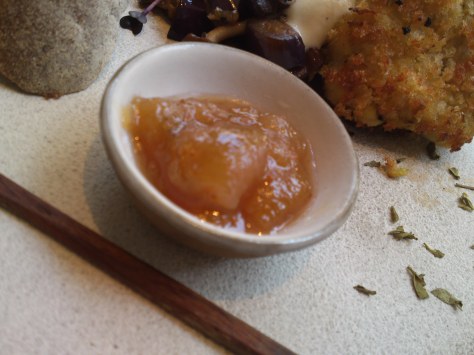 I’m glad to admit that the deep-fried vegetables patty was delicious! 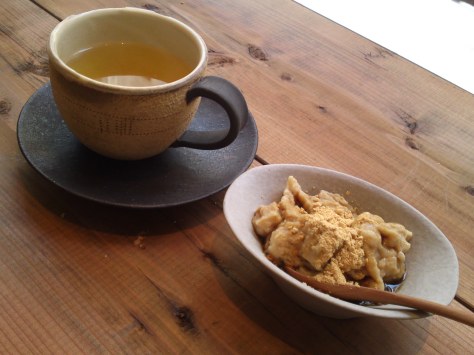 Not only a very healthy dessert but also a traditional Japnese one!

Will soon interview their other home-restaurant at: