A new kind of train?

If you have the chance to stop at Yui, Shimizu Ku, Shizuoka City, try and go to visit the Hiroshige Wood Block Prints Art Museum!
You are about to discover an unexpected sight or two there!

Of course the whole complex is a source for great photography but you should have a second look at the narrow and shallow “moat” along the wall!

What is this gentleman looking at?

From the other end…

Turtles and many of them!

I’ve counted 16 of them and they seem very sociable!

Only a couple of them were swimming under water! 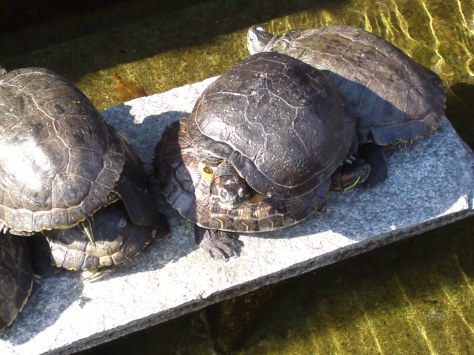 Did you that the turtle in Japan is a sign of good luck and prosperity?

They are looked after by the staff of the Museum who feed them and clean the moat regularly all year round! 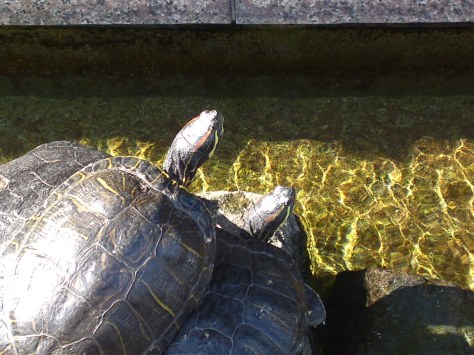 They all seem to be of the same variety with long colorful necks!

They are quite clever at getting out of the water and at climbing on top of each other!

hello, what’s up there?

Are they practicing a rugby scrum or a Spanish human mountain?

Bring your camera next time. I’m sure you will take far better pictures!