The large and medium-sized Numazu Mount Fuji Covers together!

This is a roundup of manhole covers in Numazu City although it does not include the Love Lin! Sunshine!! Manga Covers and places like Heda which were merged into the City. They will appear in future articles!

This is the beautiful color manhole covers they call “Mount Fuji” Cover in Numazu City! hard to find as there is only one to be discovered in the harbor vicinity!

The large sized Mount Fuji cover to be found everywhere in town! 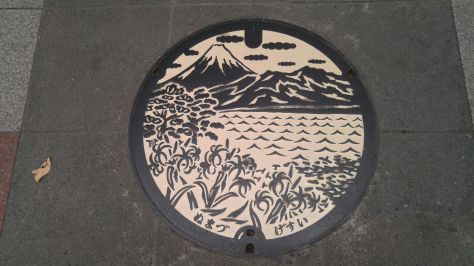 The brand new one, in black and white!

An older one with the Numazu City sigil in the middle!

An even older one with the same sigil in the middle! It is also diagonally divided!

The same, round and undivided!

This type with the same sigil in the middle can be seen in various colors to follow the patterns on the pavement!

Not a manhole cover, but a brand new pavement plaque!