There is little romantic about Gofuku Street in Shizuoka City!
It just shows you can easily transform any dour place into a destination with some appropriate photos!

You don’t even need a professional camera and whatever paraphernalia.
I took all these pictures with my mobile telephone! It is a Sony Ericsson they don’t make anymore, but I use it for all my blogs, although I do not use the flash! 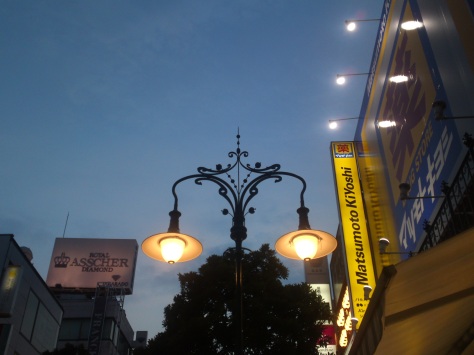 I was in Gofuku Street, walking aimelssly, at around 7:00 pm, just before dog and wolf as we say in French, but it was particularly dark.

The contrast was naturally accentuated by the lamps focused by the camera.

If you know the whims of your camera, or mobile phone for that matter, I’m sure you can come up with some very interesting shots indeed!
And you don’t need to be a pro!