13 years ago, some enlightened individuals realized that Shizuoka Prefecture would have to produce its own sake rice, at least a part of it, for many reasons even if some of them are pointedly ignored by many…
First, the culture of sake rice (as opposite to that of edible rice) is a risky venture financially and a steady supply is fraught with unseen complications. Moreover, most of brewers outside the main sake rice producing areas have to “import” their rice from Hyogo, Hiroshima, Iwate, Niigata and other faraway Prefectures.
Moreover, whatever some brewers might tell you when questioned in front of witnesses, the quality of such imported rice cannot be fully insured.

The only solution is to try and grow your own sake rice locally!
In 1998, under the auspices of the JA research was initiated on the culture of the Yamada Nishiki Sake Rice strain, considered as the best by many, in the Iwata Agricultural Research Center.
7 years later, 1n 2005, the cultivation was started in earnest in privately-owned fields under the guidance of such specialists such Mr. Miyata.

The rice stalks grow a lot thicker and nearer to each other than normal rice.

It has become serious business as from this year the Yaizu JA Agricultural Association (governmental) will assume the responsibility for the sales of Homare Fuji Sake Rice grown in the Yaizu City area!

The personal help of Mr. Ryohei Miyake of the Shizuoka Prefecture Shida Haibara Agriculture & Forestry Bureau was certainly welcome to deal with all these farmers and JA representatives!
Messrs. Miyake and Miyata were kind enough to pick me up at Fujieda Station and take care of me for the whole day!
They took me to 3 different paddies including that of Mr. Muramatsu mentioned above and introduced me to the JA Ooigawa Representative and other personalities of the business!

In every paddy Mr. Miyata took out a rice stalk to painstakingly open it with his nails to show me the grains already developed inside and to tell me thus exactly when the rice would appear and would be harvested by the day!

The second paddy was that of Mr. Matsumura (20 acres), Higashi Mashizu, Yaizu City, where planting and harvesting events are regularly held! 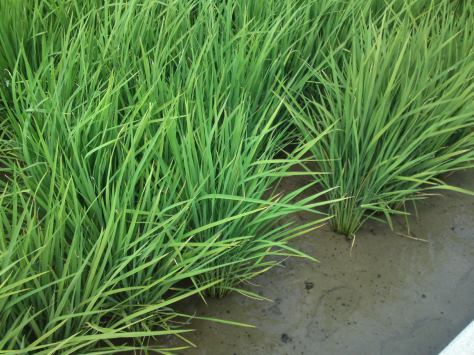 Homare Fuji Sake Rice has two big qualities:
its stalks are shorter and harder and will not break under heavy winds, even those of typhoons. Moreover, their rice contains a lot less proteins than others, which allows for an exceptional maturing of sake! 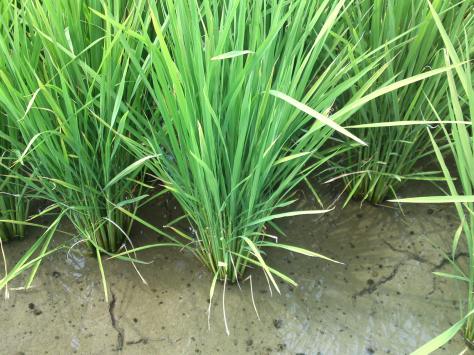 Yaizu soil is of two types whether the fields are on the former bed of Ooigawa River with a high concentration of sand like the above-mentioned two paddies or of a clay type if closer to the mountains. Naturally the soil quality has to be taken in account for each paddy!

The Homare Fuji Rice stalks are comparatively short (25 cm shorter that those of Yamada Nishiki) , but the proportion of the leaves and bottom stalks (“saya”) are longer and the very foot (“fushi”) shorter and thicker.

The third paddy I was taken to is the “heart of the Homare Fuji Sake Rice” as Mr. Toshirhiro Umehara has taken charge of growing the rice for the grains only to be re-planted elsewhere for the last 3 years! 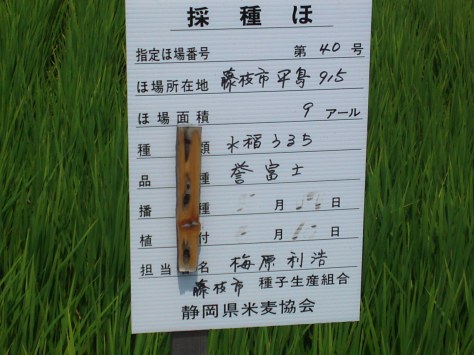 This 30-acre paddy is located in Hirajima in Fujieda City!

The grains will appear in about 10 days and the rice will be harvested in October!

This is rural Japan!

The men behind our regional sake, Mr. Yuuji Miyata and Mr. Toshihiro Umehara!

This is what is going to grow into full-fledged rice thanks to these farmers and later become the nectar of Japan (and Shizuoka Prefecture) thanks to our brewers!